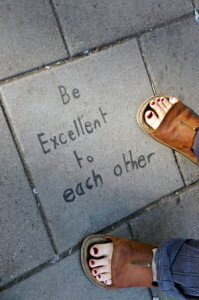 I saw the play August: Osage County this week.  It won the Tony for best play in 2008.  It won a Pulitzer Prize that same year.  The acting was top notch.  But the play itself — absolute crap.  I would chew off my own foot before I ever sat through it again.  I left the theatre feeling offended and manipulated.

The play takes despair, selfishness and hatred to an absurd level.  In a 3-hour span of time and within a single family’s existence we are dragged through prescription drug addiction, pedophilia, incest, adultery, alcoholism, indifference, intolerance and raw loneliness.  Tragedy upon tragedy is heaped on the audience.  And in the final act, we are handed an ending void of hope.  Utter hopelessness.

I don’t get why we would honor or celebrate that.

On the flip side, I also watched an amazing story unfold this week as Canadian figure skater Joannie Rochette got to the Olympics only to have her mother suddenly die from a heart attack less than 48 hours before Joannie was set to step onto the ice.  Another tragedy to be sure.  But in this story — we’re also offered incredible hope.  As you no doubt know, Joannie decided to compete despite her grief and won the bronze medal, honoring herself, her country and the lifelong sacrifices her mom made to get her to the Olympics.  Hope and courage won the day.

Why am I telling you all of this?  Well, partially because that’s my intention with this little side blog.  This is for all the things that are in my heart and head that don’t belong on Drew’s Marketing Minute.  But the deeper reason is that I think our world has things a little backwards.  We spend way too much time on the darkness.  We linger too long over hopelessness.  We seem to clutch a bit tightly to anger and indifference.  We even give the theatre industry’s highest award to a work that offers nothing but despair.

I’m not suggesting that every play or movie written needs to avoid tough subjects or human suffering.  I get it — that’s real life stuff.  But I do think there’s something inherently wrong about a society that tolerates the emotional flogging of our souls that plays like August: Osage County or movies like Saw subject us to.  We need a whole lot less of that sort of “entertainment” and a whole lot more of real human stories like Joannie’s triumph over her pain and loss.

Hope can heal.  Hope can lift us up and hope helps us endure.  I vote we celebrate that.